This past Saturday was our last Saturday concert (for the foreseeable future, anyway) and we saw The Maine.

One of my first Music Monday posts was about The Maine. They’re one of my all-time favourite bands: they consistently put out good music, their live shows are always fantastic, and it doesn’t hurt that they’re easy on the eyes (as Nina put it, photos don’t do them justice – they are beautiful).

This show was different than the last 4 times I’ve seen them – for one, it was in a tiny venue (the always sketchy Hard Luck Bar) and it was acoustic. They’ve been doing acoustic shows for the past two months, playing in select cities. When they finally announced a Toronto show, it sold out in less than 4 hours (about 200 people capacity).

I was pretty stoked when they later announced that their good friend, Nick Santino, formerly of A Rocket to the Moon, was opening for them. I’m an ARTTM fan (I was very sad when they disbanded) and I love Nick, so it was pretty much the best thing they could have done. 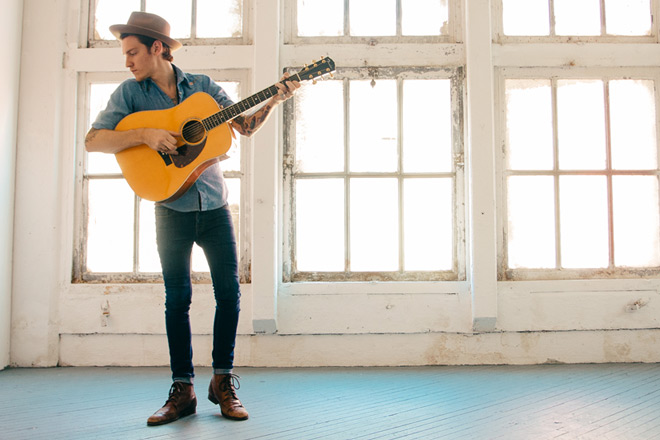 He played about 6-7 songs, just him and his guitar, and it was the perfect way to get the crowd ready for The Maine.

His latest song, written with John O’Callaghan from The Maine.

The Maine went on just before 8 and played until 9:30, I think. Their set was a mix of songs from all 4 full length albums, plus the acoustic ep they released in December (Imaginary Numbers). As Ro said, it showed just how talented they are, that they were able to take songs and turn them acoustic without losing anything. In fact, some songs sounded better live and acoustic compared to the album versions.

One of the highlights was “You Left Me”, a song they had never played in Canada until this show. It’s from their first album, 2008’s Can’t Stop, Won’t Stop, and the band has previously said they didn’t love the way it turned out (it’s very dance-y, lots of production, didn’t really fit with the album it was on, and certainly doesn’t sound like their more recent stuff). But they completely reworked it and it sounded fantastic acoustic.

The original version…fun if you wanna dance, but the acoustic version is something you could listen to on repeat.

All of the songs they picked to turn acoustic worked out really well (possible exception being “My Heroine”, which was the only one Ro and I thought didn’t sound completely right – still good, but not the same as hearing it plugged in/full band/whatever the opposite term for acoustic is). It’s a beautifully sad song to begin with, but “These Four Words” acoustic is enough to make anyone want to cry.

When he says “I don’t love you”, I just want to cry for days.

Because the crowd was so intimate, the guys (mainly John and Garrett), who often talk in between songs, were fully able to interact with the audience. It’s odd, when you see photos of the band (promotional shots, etc), they seem rather serious – but they are hysterical live. A different humour than All Time Low, but still funny: Garrett asked that we “raise the roof” (complete with hand motions), to which John mockingly informed him “that’s such a Mom dance-move”. If I were to write down all the ridiculous things they said during their set, this post would be 10 pages long.

A nice touch: after the show ended, the guys (including Nick) sat behind the tables beside their merch and held an impromptu meet & greet. I’ve technically met them before, but since the last time I stood in front of John O’Callaghan, I forgot how to speak, this was the perfect chance to redeem myself.

The Maine will be at Warped this summer (their first time playing the festival in 5 years!) – seeing them twice in one year is pretty much the best thing ever.