Alice I Have Been:

“Alice Liddell Hargreaves’s life has been a richly woven tapestry: As a young woman, wife, mother, and widow, she’s experienced intense passion, great privilege, and greater tragedy. But as she nears her eighty-first birthday, she knows that, to the world around her, she is and will always be only “Alice.” Her life was permanently dog-eared at one fateful moment in her tenth year–the golden summer day she urged a grown-up friend to write down one of his fanciful stories.

That story, a wild tale of rabbits, queens, and a precocious young child, becomes a sensation the world over. Its author, a shy, stuttering Oxford professor, does more than immortalize Alice–he changes her life forever. But even he cannot stop time, as much as he might like to. And as Alice’s childhood slips away, a peacetime of glittering balls and royal romances gives way to the urgent tide of war.

For Alice, the stakes could not be higher, for she is the mother of three grown sons, soldiers all. Yet even as she stands to lose everything she treasures, one part of her will always be the determined, undaunted Alice of the story, who discovered that life beyond the rabbit hole was an astonishing journey.

A love story and a literary mystery, Alice I Have Been brilliantly blends fact and fiction to capture the passionate spirit of a woman who was truly worthy of her fictional alter ego, in a world as captivating as the Wonderland only she could inspire.”

This book has been on my “To Read” list for at least a year and I finally got around to it this past week.

I quite enjoy Alice in Wonderland though I didn’t realize how much I like it until I re-read it for my Children’s Lit class about three years ago and re-discovered how whimsical it is (I like whimsy). So, despite how long it took me to actually pick it up, I was very intrigued by this book – for all my knowledge of Alice in Wonderland, I don’t know much about the real Alice herself.

I’m sure everyone, at some point, has heard that Lewis Carroll (Charles Dodgson) was a bit – well, creepy, is probably the best way to put it, particularly in terms of his fascination with photographing little girls (even that sentence is creepy). What I didn’t know where that there were some rather risqué photos of a young Alice Liddell that probably fuelled these thoughts to begin with. 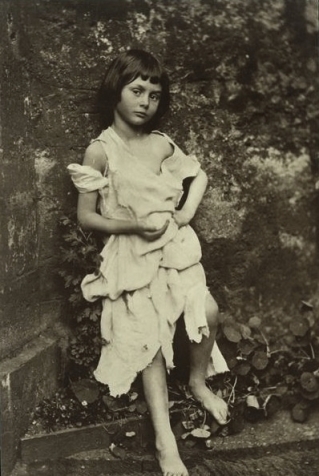 This one in particular – quite scandalous when you think about the era and the fact that she was only 7 at the time.

I also didn’t know that there was a point where the Liddells broke off all communication with Dodgson and there are no recorded explanations (correspondence burned, pages from his diary ripped out…); that’s the whole basis of this book: what happened, presumably between Alice and Dodgson, that led to this break?

Benjamin doesn’t explicitly say what she thinks happened until near the end of the book when eighty-year-old Alice Liddell is reflecting on her childhood, right before selling her first (handwritten) edition of Alice’s Adventures Under Ground. Because we don’t have real facts, a lot of the novel is based on speculation, but it’s interesting.

It also made me feel a bit creepy and at first, I was worried it would ruin Alice in Wonderland for me, but if anything, it just made me think: what did happen between Alice and Dodgson? Will we ever know the truth? Probably not, but this book did a good job at offering a possible explanation.