Last Saturday, I went on a miniature baking spree. By “baking spree”, I mean I found a can of pumpkin puree – you know, the one I bought before Thanksgiving because I ambitiously thought I would make a pie again, only to remember that I’m actually really lazy? Yeah, that one – and used it to make two types of cookies. TWO! That’s twice as many as I would normally bake.

The first was a recipe that I (relatively successfully) tried last October, pumpkin chocolate chip cookies. 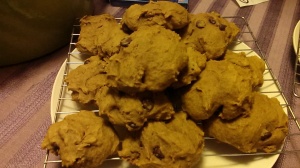 Not as pumpkin-y as I thought they would be, but they came out looking – and tasting – like muffin tops, which everyone knows is the best part of a muffin, so it wasn’t all bad. I think I was a little overzealous with the amount of dough I used per cookie (in my defence, the recipe says it yields “about 18” and I ended up with 16, so I really don’t think making two more would have made a big difference). I’ll get the hang of these eventually, but I probably won’t try them again until next year (no more pumpkin for me, it’s almost Christmas cookie season!).

Next, I tried a new recipe – pumpkin molasses cookies – for no other reason than because I had half a can of pumpkin left, and a carton of cooking molasses leftover from when I made a pecan pan for my mom’s birthday. 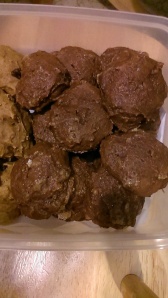 These cookies are not the most attractive when photographed…but they were tasty! Again, I had the muffin-top consistency (either I under-stir, or over-stir, I can’t figure it out). Plus, because I ended up with slightly-more-than-half-a-can of pumpkin, I had to add a few extra spoons of flour, otherwise the dough was way too liquidy to do anything. The recipe doesn’t tell you to refridgerate the dough, but I did, which made it easier to scoop. I have no idea how to roll them in sugar though (without making a really big mess), so mine definitely weren’t as pretty as the ones on the Crosby’s website.

Overall, I have a hard time making cookies and I’m going to blame it on the baking soda (or baking powder, whichever one makes the dough rise), but really it’s because baking is not my forte. I am, however, exceptional at eating baking goods…