Normally when I’m on/around the Danforth area, I eat Greek food (since that’s what it’s famous for). But since we were going to the Taking Back Sunday show, we didn’t want to eat too much and end up feeling sick while jumping around. So we settled on Factory Girl, which is literally a 30 second walk away from the venue.

Ro ordered cocktails for us. She wouldn’t even let me see the menu before she (correctly) picked the best drink for me. Rum, orange juice, pineapple juice, lemonade, grenadine, and bitters – yep, that sounds like something I’d like (I loved it).

We also decided to split the main course, and, since I’m addicted to pizza, we obviously had to order something from the menu that claims to be one of the “best pizza restaurants in Toronto”. Spoiler alert: it was one of the best pizzas I’ve ever eaten (in Toronto or otherwise).

The Francesca: olive oil, mozzarella, mascarpone, prosciutto, pear, and spinach, drizzled with balsamic vinegar. It was delicious.
Because I eat pizza backwards, the first thing I tasted was the crust – and it was amazing. It wasn’t tough or heavy; it was as light as thin-crust frozen pizza, but tasted about a million times better. The pear and balsamic vinegar gave it a sweetness that wasn’t overpowering and perfectly complimented the normally-salty prosciutto.

Then we had dessert, because after a pizza like that, how could we not want to try dessert.

I had Jerry’s Famous Bread Pudding; I don’t know who Jerry is, but I applaud him. It tasted like a cinnamon bun, but there were different spice flavours running through it that gave it an extra kick. The top of each piece was a little crunchy, but in a good way – a solidified sugar way.

Ro had the Banana Caramel Cheesecake in phyllo pastry. It was exactly what it sounds like, but that didn’t stop it from being delicious. The phyllo pastry was soft and the cheesecake squished out of it (or, at least, it did when I tried it), but that was part of the fun. I wouldn’t have thought throwing phyllo pastry anywhere near cheesecake would be a good idea, but they proved me wrong. 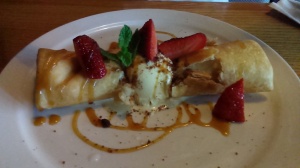 Final verdict: Very satisfied. I was full even after splitting the meal (though, to be honest, I probably could have eaten the whole pizza. I’m not saying I should, I’m just saying it’s possible), and it was an overall delightful experience. Plus our waitress was very nice and on the ball, which is always a bonus.