A devastating plague has decimated the population, and those who are left live in fear of catching it as the city crumbles around them.

So what does Araby Worth have to live for?

Nights in the Debauchery Club, beautiful dresses, glittery makeup . . . and tantalizing ways to forget it all.

Not only does this book have a gorgeous cover, but it’s based on/influenced by a short story by Edgar Allan Poe (The Masque of the Red Death, obviously). These are two surefire ways to pique my interest and I’m glad I picked this one up.

I mean, for one, it has a steampunk vibe which is very cool.

But most importantly, a  handful of pages in, you’re introduced to Will who is described as having dark shaggy hair and tattoos, which immediately made me think of Oli Sykes. 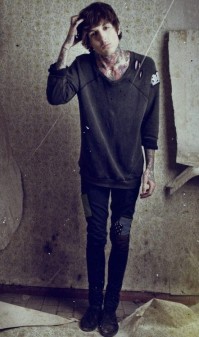 Did I just use this book as an excuse to Google pictures of Oli Sykes? …Maybe.

And after that, I was basically Team Will. Until the end, when I gasped and now I don’t know what to think because I was not expecting his character arc to go in that direction. So now I’m torn between the two guys because, on one hand, I genuinely liked Will (and so did Araby), but on the other, Elliot might actually be more trustworthy. GAH, I don’t know who to root for!!

I liked Araby as a narrator, but she doesn’t do anything outstanding. Well, she tries, but circumstances prevent her from doing a lot of useful things. Still, you have to feel sorry for her, especially when you find out how her twin brother died. I do wish she had a little more backbone though; and, while her “vow” certainly increased the tension between her and the two guys, it was a little bit ridiculous.

For the most part, I liked the characters. There were a few surprises and a couple of “I totally saw that coming” plot points, but for the most part, it was well plotted out. My one issue was that sometimes the writing seemed choppy, like there were little to no transitions between moments or scenes. It didn’t take away from my understanding of the novel, but it did occasionally cause me to pause and question if I had accidentally skipped a paragraph.

I also have no idea what the timeline was (days? weeks?), but it doesn’t really affect the story. When you read a lot of YA, you get used to people proclaiming their love for each other after only a couple of days, so it doesn’t seem weird.

Now, out of curiosity (and because I actually quite like Poe), I decided to read his original story. For something so short (it’s about five pages long), it’s pretty creepy. I shivered a little and immediately regretted reading it an hour before bed.

Poe does visuals well, plus, being a Phantom of the Opera fan means I can easily picture the costume (i.e. what the Phantom wears during the “Masquerade” scene).

I think there will be more similarities between Poe’s original and Griffin’s sequel (Dance of the Red Death, which I have to buy), so that will be an intriguing read.