On Wednesday, Ro and I went to the Manchester City vs Toronto FC game (because sometimes we like to watch sports. It’s rare, but it happens). Before the game, we went to the Amsterdam Brewery. We’ve been there before, a couple of years ago, but apparently much of the menu has changed since last time. 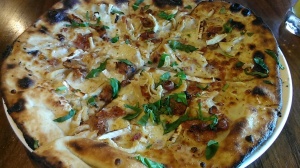 I had basically decided on pizza as soon as we walked past the kitchen and saw someone else’s order. This one had white sauce, mozzarella, brie, smoked bacon, chicken, baby spinach, and roasted garlic. The roasted garlic made it taste like garlic bread, which wasn’t a bad thing. 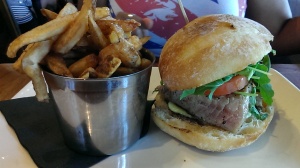 Ro had the pan seared tuna sandwich. It was a very large chunk of fish which, on the one hand, was worth the price. On the other, it looked a bit cumbersome to eat, and the inside was still very pink. I guess that’s the way one is supposed to eat tuna, but since we’re the type of people who fry the heck out of a steak, it was a little unexpected. Consequently, t had a bit of sushi/sashimi taste. 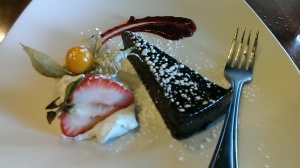 For dessert, I had the flourless chocolate torte. The thing I’ve noticed about flourless desserts is that they always tend to be denser: this one was basically a soft chocolate block. Since I have a chocolate problem, I had no trouble finishing it, even though I ended up feeling very full. 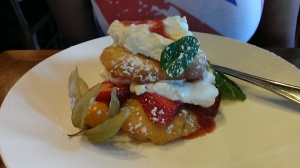 Ro had the strawberry shortcake. The “cake” was more like a biscuit or a scone, and it was surprisingly yummy! It was also just a pretty plate, and, as everyone knows, presentation is very important.

I didn’t take a picture of them, but we followed our meals with, of course, drinks: I had the Sweetwater Squeeze Radler (which was orange, even though we were expecting it to be red because it was made with blood orange juice), and Ro had the Downtown Brown Ale.

Final verdict: Satisfied! I remember feeling unsatisfied with our meal the last time we were there, but this time made up for it. I haven’t decided if this pizza was better than the one at Factory Girl, but it was definitely tasty.