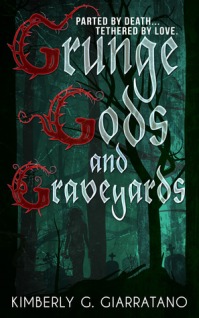 Lainey Bloom’s high school senior year is a complete disaster. The popular clique, led by mean girl Wynter Woods, bullies her constantly. The principal threatens not to let her graduate with the class of 1997 unless she completes a major research project. And everyone blames her for the death of Wynter’s boyfriend, Danny Obregon.

Danny, a gorgeous musician, stole Lainey’s heart when he stole a kiss at a concert. But a week later, he was run down on a dangerous stretch of road. When he dies in her arms, she fears she’ll never know if he really would have broken up with Wynter to be with her.

Then his ghost shows up, begging her to solve his murder. Horrified by the dismal fate that awaits him if he never crosses over, Lainey seeks the dark truth amidst small town secrets, family strife, and divided loyalties. But every step she takes toward discovering what really happened the night Danny died pulls her further away from the beautiful boy she can never touch again.

Thank you to NetGalley for providing a free copy in exchange for an honest review!

I was intrigued by the cover, and I’m automatically drawn to books where the love interest is a musician (it was an bonus that he also happened to be a ghost), so I figured I’d give this one a shot. I ended up enjoying it a lot more than I thought I would!

-the fact that it takes place in the nineties. Admittedly, I would have been 7 when this story takes place, so my memories of the early nineties are pretty fuzzy, but, as a music fan, it was interesting to see what songs/bands were mentioned and how the different bands separated the different groups of people (i.e. mean girl Wynter is a Spice Girls fan, while Danny is all about the Afghan Whigs).

-the characters. At first I wasn’t sure what to make of them, but they ended up growing on me to the point that I was actually invested in their story. When I started, I got The Hollow (Jessica Verday) vibes, and since that’s one of those books where I loved the concept but hated everything else (especially the characters), I was a little worried.

It worked out, though, and, even though I didn’t love Lainey’s best friend Wilder to begin with, once I hit a certain point, I started to understand her more. Plus, you actually feel sad when Lainey and Danny interact because they literally – physically – can’t be together (or can they?) since he’s, you know, dead. As tragic as their story is, I liked that he was logical enough to try to convince her to move on so that she wouldn’t waste her life on a ghost. Which is more than can be said for the love interest in The Hollow.

-the mystery. Eventually, it becomes pretty obvious who was behind everything, but the story was woven together nicely and there were very few (if any) moments where you felt like the author was just pulling plot points out of thin air. Everything connected and was believable within the novel’s world.

-the Lady in Blue. She had a great back story and I wanted to know more about her, but the ending set up the second book (something I both like and don’t like).

-Ghost Danny doesn’t show up until 30% of the way through. By that point, I was getting impatient, but I don’t think his “late” appearance really affected the way the rest of the book played out.

-Wynter was such a stereotypical mean girl. She served her purpose, but that didn’t mean I had to like her.

If I was trying to pitch this book, I’d say it was a combination of Melissa Marr’s Made for You and Elizabeth Chandler’s Kissed by an Angel but with more ghosts and, well, grunge (those are all good things, by the way).