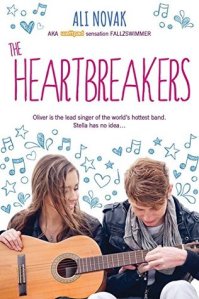 Stella will do anything for her sick sister, Cara—even stand in line for an autographed Heartbreakers CD…for four hours. She’s totally winning best birthday gift this year. At least she met a cute boy with soft brown hair and gorgeous blue eyes while getting her caffeine fix. Too bad she’ll never see him again.

Except, Stella’s life has suddenly turned into a cheesy love song. Because Starbucks Boy is Oliver Perry – lead singer for the Heartbreakers. And even after she calls his music crap, Oliver still gives Stella his phone number. And whispers quotes from her favorite Disney movie in her ear. OMG, what is her life?

But how can Stella even think about being with Oliver — dating and laughing and pulling pranks with the band — when her sister could be dying of cancer?

Thank you to NetGalley for providing a free copy in exchange for an honest review!

-the band. They were cute and funny, and, I imagine, realistic (I don’t know, I’ve never hung out with a boy band before, but from what I’ve heard/seen/read, it seems legit). Oliver is the caring bad boy (of course he has a sad past), JJ is hilarious, Xander is sweet, and Alec is the sensitive mysterious one.

-the relationship between Stella, Cara, and Drew (they’re triplets! But the girls are technically identical twins! Which I didn’t know was possible, but it is (Stella explains the medical reason at some point)!). They have a loving, caring relationship, and I could understand Stella’s hesitation to go out and “live her life” while Cara was so sick.

-there were some cute moments between Stella and Oliver. Entirely unrealistic, of course, but still cute. I smiled a couple of times, despite my cynicism (what I wouldn’t give to bump into an attractive band member in a coffee shop and have him fall hopelessly in love with me!).

-Stella was annoying. She was so hot and cold, I wouldn’t have blamed Oliver if he got bored and left her. She went from straight up hating the band to loving Oliver (in the span of a day!), then decided she wanted to be “just friends”, but then got upset when he respected her decision and was all “yeah, I’ll go just flirt with this fan to soothe my broken heart since you’re not interested”. Because really, why wouldn’t he flirt with fans? They’re the reason he’s famous!

-I’m pretty sure this is was just 5 Seconds of Summer fan fiction. Everything about The Heartbreakers screamed 5SOS. I actually enjoy 5SOS, so it’s not an insult, but it really just felt like I was reading fanfic (this was before I realized the author came from Wattpad and NOW IT ALL MAKES SENSE).

-the ketchup eating contest made me feel ill. I like ketchup as much as the next person, but that’s so gross, I can’t even explain it.

-as much as I loved Stella’s relationships with her siblings, I had no idea what her relationship with her parents was like. They were in a couple of chapters, and while they were seemingly supportive (instead of your typical neglectful YA parents), she didn’t mention talking to them before going out on tour with The Heartbreakers.

You’d think her parents would express some concern over their 18 year old daughter touring with the most famous boy band in America. But apparently not.

-it had a happy ending, which was sweet, but holy smokes, it felt rushed. Almost like the author ran out of steam right near the end so she threw together the most logical ending. Which is fine, and it happens to the best of us, but to actually publish it like that? It could have been fleshed out more.

-I also don’t get how Cara was so cool about her sister befriending her favourite band, especially since Stella couldn’t stand The Heartbreakers at the beginning. If my sister ever showed up and told me she was dating John O’Callaghan from The Maine, I’d probably cry. I’d be happy for her, eventually, but first there would be tears and screams of “WHY COULDN’T IT BE ME?!” But Cara’s all “that’s soooo cool, OMG, you’re sooooo lucky, tell me everythinggggg”. Which rang a little false for me.

Having written the review, I’m going to say that while I was initially going to give it 3 stars, I think I’ll drop it down to a 2.5. If you’re in the mood for a fluffy fanfic, then this will be your jam. There are some serious moments (Cara does have cancer, after all), but it veers around truly emotional territories.