Before the Fall Out Boy show on Wednesday, Ro and I took a long walk down King Street in our quest to find WVRST – a sausage (and beer!) hall.

Let me just say it was worth the trek.

For one, it’s really nice instead. It has long tables and benches with a sign saying seating is “communal” i.e. you may end up sitting beside a stranger. But it was really authentic because there are actually beer halls in Germany (and maybe other places) where you have to sit on benches instead of getting a secluded corner.

They have a lot of beers on tap, but we decided to try two of their ciders (also on tap): Twin Pines and West Avenue. They were quite apple-y and rather dry, but in a good way! 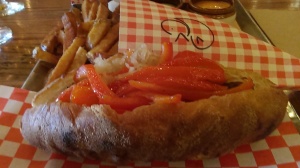 The sausages are also varied. You can get traditional ones like Oktoberfest or chorizo, but they also have an impressive selection of “game”. For example, I had the wild boar sausage. You can also choose to either have it on a toasted bun with your choice of two toppings or as currywurst. I had it on a bun with sauerkraut and sweet peppers and it was delicious. We also had fries which were cooked in duck fat – you can sort of see an illustration of a duck on the red-and-white paper cone. They were delicious, and now I just want to make everything in duck fat (even though it’s probably not good for you).

Ro had the venison sausage (topped with sauerkraut and onions), which she said was also delicious.

Final verdict: Very satisfied! It was filling but we didn’t feel disgusting afterwards; the atmosphere was fun; and if we hadn’t been on our way to a show, we could have stayed there for hours, trying all the different sausages and beer. We’re planning on taking our brother (and parents) there for our brother’s birthday in September, so you could say we’re looking forward to it!