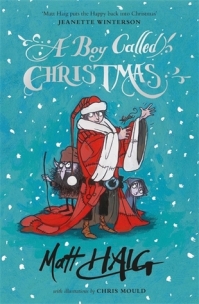 You are about to read the true story of Father Christmas.
It is a story that proves that nothing is impossible.
If you are one of those people who believe that some things are impossible, you should put this book down right away. It is most certainly not for you.
Because this book is FULL of impossible things.

Are you still reading?

A Boy Called Christmas is a tale of adventure, snow, kidnapping, elves, more snow, and an eleven-year-old boy called Nikolas, who isn’t afraid to believe in magic.

If I was smart, I would have listened to my sister and read this a couple of days before Christmas, but I was busy (I guess) and didn’t get around to it until Christmas Day.

Nevertheless, it was a wonderful festive read!

A Boy Called Christmas tells the story of Father Christmas from his humble beginnings as a poor little boy Nikolas. His journey involves all the things you would expect from a Christmas legend: elves, reindeer, a red hat. But rather than making them your usual happy-go-lucky elves, reindeer, and red hats, Matt Haig puts a unique spin on them: the elves live in Elfhelm and don’t like humans; certain reindeer enjoy “weeing” on people when they fly; and the red hat belongs to Nikolas’ widowed father who makes some poor decisions.

There will be a lot of people in your life who will tell you to ‘grow up’ or to insist that you stop believing in magic.

Do NOT listen to these people.

There’s also a mean aunt straight of a Roald Dahl book, a pixie with a penchant for exploding heads that wouldn’t be out of place in a Neil Gaiman children’s books, and a series of unfortunate events not unlike those by Lemony Snicket. In short, this book is an amalgamation of some of the best children’s book authors in history, and if you’re a fan of any of the above-mentioned dudes, you need to pick this one up.

A quick read, it would work well as a read-along leading up to Christmas for younger children, but most kids could zoom through it on their own in about a day. The only reason I’m docking .5 of a star (well, an interrobang) is because there were a couple of moments that dragged the story down. Highly recommended to get you in the festive spirit!