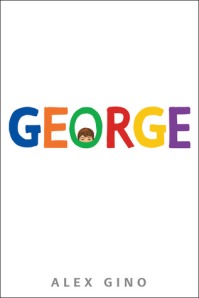 BE WHO YOU ARE.

George thinks she’ll have to keep this a secret forever. Then her teacher announces that their class play is going to be Charlotte’s Web. George really, really, REALLY wants to play Charlotte. But the teacher says she can’t even try out for the part . . . because she’s a boy.

With the help of her best friend, Kelly, George comes up with a plan. Not just so she can be Charlotte — but so everyone can know who she is, once and for all.

I’ve heard amazing things about George, so when I saw it on sale at a library (I’m the only person I know who can go to a library and buy a book), I picked it up right away.

I don’t know a lot about transgender and transitioning or how terrible it must be to feel like a stranger in your own body. I don’t even know if I have all the right vocabulary to be able to talk about it because I don’t have the personal experience to relate to. But I think everyone can understand the loneliness George feels, and it’s easy to empathize with such a sweet character.

It takes a special person to cry over a book. It shows compassion as well as imagination.

It’s hard for George to “come out” to people, and the adults in her life don’t make it any easier by constantly reinforcing the idea that she is a boy. Those are the most heartbreaking moments, which are especially sad because I know there are children out there who actually have to deal with this kind of attitude. I do think it’s lovely that George’s older brother is ultimately so accepting of her, even if her mother takes a while to come around.

It’s a short read, but it’s an important one. For all the simplicity of the language, the topic is fairly complex, and I think it was a good step in the right direction.