On Friday, we went to see the Alice’s Adventures in Wonderland ballet, and, since we obviously had to eat first, we wandered down the street to the Queen Mother Cafe. It’s housed in a historic building (apparently more than 150 years old!) and has been around since the 70’s.

Their menu consists of mostly fusion/pan-global cuisine, as you’ll see from what Ro and I ate.

I like what I affectionately refer to as “brown food”: you know, traditional foods from Sri Lanka/India, etc. So I often end up ordering a curry or some sort of roti dish when I’m at a place like this. 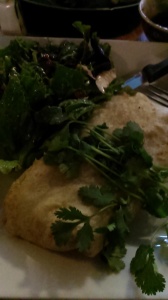 This was a traditional Sri Lanka roti, and I can confirm that it tasted exactly like what my mom (well, actually my aunt) makes. It was also essentially a “brown” version of a burrito, and since I love burritos, this was amazing! It was stuffed with sweet potatoes, eggplants, chickpeas, and a few other vegetables, plus a spicy* curry sauce.
*I have a high spice tolerance, so it was a bit of a kick, but not nearly as sweat-inducing as the stuff my dad makes. 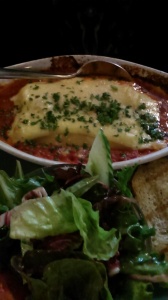 Ro, meanwhile, had a spinach and ricotta cannelloni because she has always favoured Italian food over “brown” food. I stole a piece of her garlic toast and it was crunchy but tasty.

The cafe has a window full of dessert options; unfortunately, I gave up chocolate for Lent, so I couldn’t try any of their decadent-looking chocolate cakes. I did, however, have a piece of key lime pie: it wasn’t too sour, the cream was smooth and refreshing, and the granola (oatmeal?) crust was a nice balance between crunchy and chewy.

Ro had a lemon dacquoise, which is a type of cake made from layers of hazelnut meringue and lemon buttercream. It was airy and delicious (like all meringues)!

Final verdict: Satisfied! I enjoy fusion cuisine, and, even though the menu was surprisingly similar to The Rivoli (which is only about a block away), the food was still done well. We didn’t try any drinks, though, so maybe next time we’ll have to have a cocktail to see which restaurant wins (sidenote: the Long Island Iced Teas at The Rivoli are some of the greatest things I’ve ever tried).