I love burritos. Like Jake the dog, when I order a burrito, I get everything on it.

My preferred place is Burrito Boyz and this past week, I decided to try something different. I had a quesadilla. 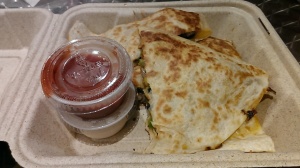 I guess this post isn’t a review so much as a love letter to what was, hands down, the best quesadilla I’ve ever eaten (and quesadillas – along with chicken fingers – are my go-to order when at a bar, so I kinda have experience, even if it hasn’t always been “authentic”).

I asked for everything on it because I like to live dangerously. And even though I don’t actually like cilantro, I eat it when it’s included in Mexican food of any sort (but only Mexican food. I will not eat it otherwise). Instead of just cheese, I went with a steak quesadilla.

It also came with those cute little containers of burrito sauce and mild salsa.

The cheese was gooey and delicious. The one line of hot sauce was quite, in fact, hot – on the one hand, I almost wished for a second line to kick it up a notch…but on the other hand, I was going to a concert, and didn’t want to die before I got there. The steak was well done, as always, and the toppings were generous without being overwhelming. It didn’t stop me from making a mess, of course, but it was completely worth it.

The quesadilla, in my opinion, was slightly less filling than a burrito – which makes sense, considering there are less ingredients – but it was exactly what I was looking for at the time.

Final verdict: satisfied so much, just looking at that picture makes me want to find the nearest Burrito Boyz location.