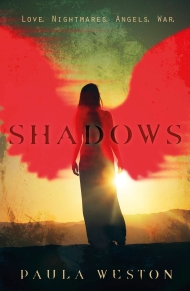 It’s almost a year since Gaby Winters watched her twin brother die. In the sunshine of a new town her body has healed, but her grief is raw and constant. It doesn’t help that every night in her dreams she fights and kills hell-beasts. And then Rafa comes to town. Not only does he look exactly like the guy who’s been appearing in Gaby’s dreams, he tells her things about her brother and her life that cannot be true, things that are dangerous. Who is Rafa? Who are the Rephaim? And who is Gaby? The truth lies in the shadows of her nightmares.

Gaby Winters’ life used to be pretty normal. She lived with her best friend. She worked in a library. She was slowly getting over the death of her twin brother, Jude. And then Rafa came looking for her.
With him, her blood-soaked nightmares stopped. But now they are reality. She is one of the Rephaim – a wingless half angel, descended from the Fallen. Demons exist and they are hunting her.

She knows she’s alive when she’s meant to be dead. And that means maybe Jude is too. So why isn’t she out there looking for him?

FAIR WARNING: There are probably going to be spoilers here. Consider yourself warned.

Remember when fallen angels were all the rage? I know I’ve read a handful of series about Nephilim (half-angel, half-human), but I hadn’t picked up a new series about angelic offspring in a while and these books sounded great.

For one, I had a hard time connecting with the characters. Gaby is that girl you expect to die quickly in any book/movie/TV show because she often makes stupid decisions. For example:

Gaby: Hey, let’s return to that place where we saw the bad guys yesterday. They won’t think to check back there, right?
Literally everyone else: No, Gaby, that’s not the best ide-
Gaby: Too late, I’m here. Wow, this really is dangerous, isn’t it? *people die/get stabbed/are ambushed/kidnapped, etc*

In her defense, she always had to go back for the humans (i.e. non-Nephilim/Rephaim). But I did not like the human characters. Well, Maggie was fine, but the rednecks – are they called rednecks in Australia? – were annoying, and Simon was so Simon-from-The Mortal Instruments (who I can’t stand) in that “I love the protagonist, but when she shuns me for the hottie from “her world”, I’m gonna rebound with this random chick who may or may not endanger my life”.

Replace “Sean” with “Simon” and that’s exactly how I feel.

My favourite character was Jude, and he didn’t even show up until 320+ pages into the sequel. I wish he had shown up earlier, he almost made the wait worthwhile.

On a related note: this is a series where a lot happens in the span of a week, but it takes so long to describe, it feels like it’s taking years. It took 300 pages before Gaby gets it together enough to go look for her TWIN BROTHER who she THOUGHT WAS DEAD because she was too busy proving herself to the rebellious Mya and/or making out with Rafa. I mean, I like Rafa as much as the next girl, but honestly, Gaby.

You tell her, Ron.

Also, Gaby’s lack of memories is SO FRUSTRATING. I realize that it’s frustrating for her, and it’s not her fault she can’t remember, but what about the other 7 Rephaim who know things about her but refuse to tell her? This, I think, is part of the reason why I feel like the pacing was too slow. Stop torturing me and just spill the beans already!

But then there was a “what the frick-frack?!” moment at the end that basically forces you into wanting to read the next book. Kudos, Paula Weston, just when I’d given up, you managed to hook me along for the rest of the ride. I’m impressed. Bring on Shimmer!