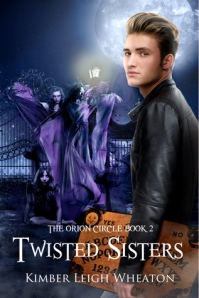 While playing with a spirit board, two sorority sisters summon the vindictive spirits of three women brutally murdered by a psychopath. Join Logan, Kacie, and the rest of the Orion Circle as they delve into the disturbing events of the past to find the key to freeing the spirits.

But this isn’t any ordinary haunting. These ghosts were banished before, and now they have returned more powerful than anyone could have imagined. Anger breeds hatred and hatred leads to darkness—these phantoms are on the verge of losing their last spark of humanity and becoming completely lost to the shadows.

Can Logan and Kacie convince the tortured souls to embrace the light and move on, or will the spirits succumb to the hypnotic pull of evil, leading to an eternity of torment and suffering?

Thank you to Xpresso Book Tours for hosting this blog tour!

Twisted Sisters is the sequel to Tortured Souls, but can be read as a standalone. I read both books back-to-back to get the full experience, but enough backstory is given that you don’t feel like you’re missing anything.

I don’t know what I was expecting going into these books, but I have to say, while they were decent reads, I didn’t love them.

-the plot: who doesn’t love a Ouija board experiment gone wrong? Books like this are the reason I’m both intrigued and terrified of Ouija boards.

–Twisted Sisters introduces a new character named Blake (who was mentioned at the end of Tortured Souls). He’s a werewolf (this is not a spoiler) so he’s all charming and smooth-talking. I actually wouldn’t have minded at all if the book revolved around Blake and the other new character, Raven.

-the rest of the characters. I’m sorry, but Kacie was so…bland. For someone with her powers, she didn’t jump off the page for me, and it made it hard for me to focus. I also didn’t like Logan (sorry) because he came off as a bit of a tool, especially in Twisted Sisters. I understood that he was frustrated by people messing with paranormal stuff, but he was so aggressive when questioning the sorority sisters. Like, calm down, bro, they haven’t been training for this since they were children, of course they didn’t know what was going to happen!

-I also found Kacie/Logan’s romance to be quite tiresome. It wasn’t quite insta-love, but they spent pages mooning after each other/making out at inappropriate times/cuddling, etc.

-normally I’m a big fan of diverse dialogue tags (it can be boring to just use “said” all the time), but the word “murmur” was used so many times, it felt like the characters were unable to speak at a normal volume.

I’m going to sound old and crabby when I say this, but I think this is the type of book that I would have loved ten years ago (when I was closer to Kacie’s age!). If I had read it at the same time as I read, let’s say, Twilight, heck yeah, I’d have been all over it. But after ten years of reading YA paranormal/supernatural/urban fantasy novels, a book has to be really unique or gorgeously written for me to love it.

That being said, I think a lot of people will enjoy this series, especially if they haven’t read extensively from the paranormal genre.

Make sure you check out the rest of the blogs this week!

February 18th
–Hey, It Was Free!
–Enjoying life a day at a time
–The Rest Is Still Unwritten
–Bookworm for Kids
–Don’t Judge, Read